LAURA BENANTI: LIVE FROM THE WEST SIDE, POWERED BY PNC | TICKETS ON SALE NOW 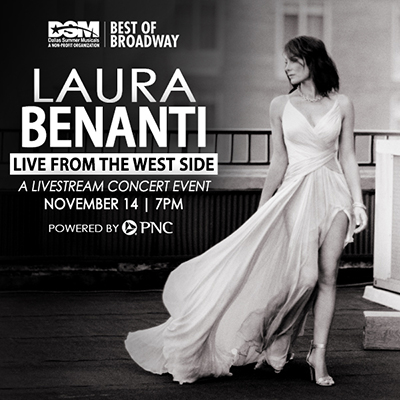 Tickets for Laura Benanti: Live from the West Side, Powered by PNC are $30 per household and are available at DallasSummerMusicals.org. Ticket holders will have access to an on-demand video recording of the livestream for 72 hours, available beginning one hour after the live broadcast ends. Proceeds from ticket sales will support DSM’s mission to deliver the spirit of Broadway to North Texas audiences through educational programs and community outreach initiatives.

“We are pleased to continue offering our patrons livestream concerts with such esteemed Broadway stars, such as Laura Benanti, to keep our fans connected to their love of live musical theater,” said Ken Novice, president of Dallas Summer Musicals. “We’re even happier to share this fundraising entertainment project with other nonprofit arts organizations around the country who need support, just like us. We know Broadway will be back, and it’s important, now more than ever, that we bring the magic of Broadway in any form we can to everyone who misses it.”

Benanti, most recently seen on Broadway as “Eliza Doolittle” in the 2018 revival of My Fair Lady, is a five-time Tony® Award nominee and received the Tony® Award for “Best Featured Actress in a Musical” for the 2008 production of Gypsy. In 2010, she was presented with the Drama Desk Award and Outer Critics Circle Award for her 2010 performance in Women on the Verge of a Nervous Breakdown. Benanti has also appeared in various television series including Younger, Supergirl, Nashville, The Good Wife, and Nurse Jackie.

Laura Benanti: Live from the West Side, Powered by PNC will be a cabaret-style performance, showcasing a mix of Broadway showtunes, pop songs, and personal stories from the life of a Broadway star. The performance will take place at The Shubert Virtual Studios on Manhattan’s West Side, transmitted live in HD with professional sound mixing. At-home audience members will be invited to email in questions to be answered during the livestream.

The livestream, which is a co-production of Dallas Summer Musicals and Entertainment Benefits Group, is being shared by more than 20 nonprofit arts presenters around the country. Laura Benanti: Live from the West Side, Powered by PNC is the second of DSM’s three-part virtual concert series, Live from the West Side: Women of Broadway, Powered by PNC, which featured two-time Tony® Award winner Patti LuPone on Oct. 24 and will also feature Tony® Award winner Laura Benanti on Nov. 14 and critically acclaimed actress and singer Vanessa Williams on Dec. 5.

ABOUT LAURA BENANTI
In the midst of an illustrious career spanning Broadway, film, and television, Tony® Award-winning actress, singer, author, and activist Laura Benanti now brings a longstanding dream to life as she gears up to release new solo music with Sony Music Masterworks.

With Broadway credits ranging from the My Fair Lady revival and Steve Martin’s Meteor Shower to She Loves Me, Laura garnered a Tony® Award in the category of “Best Featured Actress in a Musical” for the 2008 production of Gypsy—among five career nominations to date. Meanwhile, her performance in Women on the Verge of a Nervous Breakdown would be honored with the Drama Desk Award and Outer Critics Circle Award for “Best Featured Actress in a Musical.” Simultaneously, she enchanted audiences on the small screen, appearing on Younger, Supergirl, Nashville, The Good Wife, Nurse Jackie, and more in addition to films including WORTH and the upcoming Here Today. Laura recently released a book for moms entitled M is for MAMA (and also Merlot): A Modern Mom’s ABCs, available now on Amazon.

Early this spring, she created an empowering campaign titled #SunshineSongs, which invited students whose school musical productions were canceled this year due to the pandemic to share videos of the performances they were not able to give, on social platforms. As chronicled by Good Morning America, she generated 4 million impressions and received over 10,000 submissions, attracting celebrities like Lin-Manuel Miranda and Jennifer Garner to join the campaign. Additionally, she invited students to contribute songs to her free “Sunshine Concerts” for senior living communities and children’s hospitals. The campaign’s success further grabbed the attention of HBO Max who recently partnered with Benanti to release a musical documentary special featuring students from across the country entitled Homeschool Musical: Class Of 2020, set to release this fall.

ABOUT PNC
PNC Bank, is a member of The PNC Financial Services Group, Inc. PNC is one of the largest diversified financial services institutions in the United States, organized around its customers and communities for strong relationships and local delivery of retail and business banking including a full range of lending products; specialized services for corporations and government entities, including corporate banking, real estate finance and asset-based lending; wealth management and asset management. For information about PNC, visit www.pnc.com.

ABOUT DALLAS SUMMER MUSICALS
For nearly 80 years, the non-profit Dallas Summer Musicals Inc. (DSM) has presented the very best in Broadway to North Texas audiences. Located in the historic Music Hall at Fair Park, DSM promotes excellence in live musical theater with year-round performances for diverse audiences of all ages, impacting the lives of children and families through education and community outreach programs, while enriching the cultural landscape of North Texas and the Southwest Region.