ELF The Broadway Musical brings its sparklejollytwinklejingley cheer to Dallas!

ELF The Broadway Musical brings its sparklejollytwinklejingley cheer to Dallas!

Dallas Summer Musicals fills the Musical Hall with a warm festive glow as it kicks off the holiday season with the splashy, peppy, sugar-sprinkled holiday entertainment production of ELF The Musical at the Music Hall at Fair Park December 8-20, 2015. Based on the beloved 2003 New Line Cinema hit, ELF is the hilarious tale of Buddy a young orphan who is raised by elves unaware that he is actually a human, until his enormous size and poor toy making abilities cause him to face the truth. Through a journey to New York City to find his father and true identity, Buddy is determined to win over his family and help the Big Apple remember the true meaning of Christmas. This modern day Christmas classic is sure to make even the biggest Cotton-Headed-Ninny-Muggin embrace their inner ELF. Check out what the DFW Metroplex is saying about this holiday favorite. – DSM Cisco

“From the moment the overture begins, and the stage is transformed with all things Christmas, you will be marveled, and pulled into the spirit of the season” – The column by John Garcia

“This well-written, well-performed show is rife with one-liners, slapstick comedy, and jazzy choreography that makes for pure ‘elfin magic’” – The Flash List

“After watching the premier of Elf the Musical last night, we feel like we are right there with Buddy the Elf when he screams, ‘Santa! We know him!’” – Clink!

“Buddy Takes Over Dallas In ‘Elf The Musical’!” – Vanna Collins

“’Elf The Musical’ Is A Knee-Stomping, Musical Adventure That Puts The Merry Back In Christmas” – Irish Film Critic 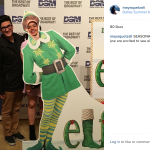 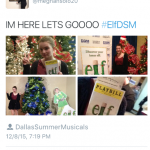 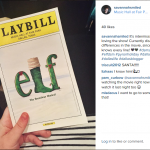 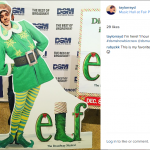 “This play will definitely get your whole family in the spirit of Christmas!” – Savannah Smiled

Top Theater Picks For the Holidays – The Dallas Morning News

ELF The Musical is on stage NOW through Sunday, December 20th at the Music Hall at Fair Park. Click here for details and tickets.

Don’t be a Cotton-Headed-Ninny-Muggin and join us to discover your inner ELF!