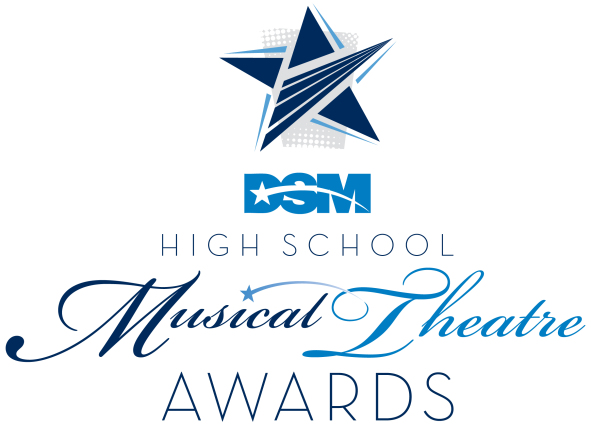 This is the first time since DSM began the High School Musical Theatre Awards five years ago that the Best Actor has placed as a finalist and both Best Actor and Best Actress have won scholarships. John received a $2,500 scholarship towards his future education from the Barry and Fran Weissler Foundation and Kaiden received a $2,500 Special Recognition Scholarship presented by Tams-Witmark Music Library, Inc.
John said, “The experience at the Jimmy Awards was unbelievable. It was such an honor and a privilege to represent the DSM High School Musical Theatre Awards and finish as one of the top four finalists in the nation. The whole experience was surreal as well as life changing. I cannot be more thankful to DSM for their sponsorship and all of those who supported me through this entire process. The past ten days have been the best time of my life and I will miss it all because it was truly wonderful. Hooha!”

Kaiden agreed, saying, “I had such an amazing time at the Jimmy Awards. I met so many talented people and was honored to be one of the six selected for a special recognition scholarship. I had so much fun making my Broadway debut on the Minskoff stage, and I can’t thank DSM enough for making this wonderful journey happen for me. I will miss it, but I’m looking forward to whatever is next!”

The annual National High School Musical Theatre Awards (the Jimmy™ Awards) is a Broadway-focused talent showcase which featured performances by all 62 nominees and solos by select finalists. Their debut on a Broadway stage followed nine days of rehearsals and private coaching with faculty at the New Studio on Broadway, NYU Tisch School of the Arts Department of Drama and other professionals. Students also enjoyed a performance of ON YOUR FEET!  including a talkback with the cast.
The 2016 National High School Musical Theatre Awards introduced a new format for the program in order to accommodate more regional awards programs and provide opportunities for more students to experience Broadway and New York City. This year there were 62 students representing 31 programs, compared to last year’s 52 students representing 26 programs.
The students auditioned before a panel of judges earlier in the week, singing two prepared songs and participating in a dance call. Based on the audition results, the students were split into two groups: The Medley Group and The Production Group, leading up to when all students performed together in the opening and closing numbers on the Minskoff stage. The groups worked together throughout the week and received the same amount of coaching. All nominees were eligible for the scholarships and awards.

DSM’s HSMTA remains the largest program of its kind in the state and the second largest program of its kind in the country and has been recognized by the National High School Musical Theater Awards as their official affiliate program for North Texas.
Just this past April, Kaiden won the Best Actress award for her performance as Lady of the Lake in Waxahachie High School’s production of SPAMALOT and John won Best Actor for his performance as Bert in Guyer High School’s production of MARY POPPINS at The 5th Annual Dallas Summer Musicals High School Musical Theatre Awards show at the Music Hall at Fair Park.
Based on Broadway’s Tony Awards®, DSM’s HSMTA brings together show business veterans, community leaders and celebrities to spotlight the achievements of high school students and their school’s musical theatre programs.

HSMTA founding sponsors are Leah and Jerry Fullinwider. Honorary Chairs were Holly and Brad Reeves. DSM Chairman of the Board is Ted Munselle.

This year has broken all records for participating schools in HSMTA. There were 67 schools participating showcasing 70 shows, representing 33 school districts across North Texas. Among the 67 are also 7 private schools. In addition, 6 schools have entered two musicals this year for the total of 70 productions which were evaluated. This represents a new all-time high of schools, teachers and students taking part in the program. This is more than double the first year’s total of 30 schools participating.
Since DSM’s First Annual HSMTA in 2012, this has truly developed into a regional program, accepting schools as far away as Denton and Allen to the north, Waco to the south, Abilene to the west and Paris, Texas to the east.

You can see their experience in New York City through DSM’s blog at https://dallassummermusicals.wordpress.com/ and Facebook page at https://www.facebook.com/DSMHSMTA  and the website at http://www.DSMHSMTA.org The 5th Annual DSM HSMTA media sponsor is People Newspapers.
For questions, contact Tracy Jordan, the program manager at 214-413-3951 or tjordan@dallassummermusicals.org

About the National High School Musical Theatre Awards:
Founded in 2009 by Nederlander Alliances LLC, Pittsburgh CLO, and Broadway Education Alliance (BEA), NHSMTA’s mission is to raise the profile of musical theatre in schools, recognize dedicated teachers and inspire the next generation of performers and enthusiasts. Also known as The Jimmy™ Awards, in honor of legendary Broadway producer/theatre owner James M. Nederlander, the NHSMTA is partnered with NYU Tisch School of the Arts and supported by many leading theatre industry organizations. More information about the National High School Musical Theatre Awards can be found at http://www.nhsmta.com

As a 501(c)(3) non-profit organization, DSM relies on a variety of funding sources to bring the Best of Broadway to Dallas at affordable ticket prices, as well as to preserve the beautiful historic theatre, educate young audiences and create important community programs. DSM’s Seats for Kids program provides a meaningful arts education experience to thousands of low income, at-risk and special needs children. DSM Kids Club is a program created to foster tomorrow’s musical theatre audience. Through exciting activities children gain an interest, hands-on-knowledge and appreciation of the performing arts. In addition, Dallas Summer Musicals Academy of Performing Arts offers professional theatre arts training and scholarships to talented students in need. DSM’s High School Musical Theatre Awards are patterned after Broadway’s Tony(r) Awards and celebrate the power of the arts to significantly improve all areas of education. DSM Associate Producers is a dynamic group of young professionals with a mission to support DSM by cultivating future patrons and leaders making DSM part of the culture for young professionals in Dallas. DSM Guild is a group of individuals who share a love of musical theatre and support DSM by providing stellar service and hospitality to the cast and crew of every show.

Since 2010 the experts at DSM have made significant changes and upgrades to its acoustical systems to improve the sound quality of the productions for all its patrons, including the hearing impaired, leading to the development of Hear Us Now!(tm); a device which utilizes five assistive listening technologies (T-coils, FM Classroom, Streamers, FM systems, and traditional headsets) to deliver a clear and direct audio signal. It is so unique that a trademark has been allowed by the United States Patent and Trademark Office. Seats for Vets, DSM’s newest initiative, serves war veterans and their families by providing them discounted access to a unique theatrical experience as a way of thanking them for their service. Ticket sales alone do not sustain these endeavors. Only support from committed businesses, foundations and individuals make these programs possible.