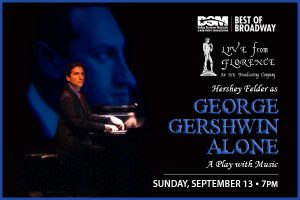 Dallas, TX (August 27, 2020) – Dallas Summer Musicals (DSM) announced today that it is one of a select group of U.S. arts organizations participating in the livestream event, Hershey Felder as George Gershwin Alone –  Live from Florence to be streamed live on Sunday, September 13 at 7 p.m. CST. Tickets are on sale now.

Tickets are $55 per household and include access to the livestream performance plus one additional week of on-demand viewing of a video recording of the livestream, available beginning one hour after the live broadcast ends. Tickets are available exclusively online at DallasSummerMusicals.org. After purchase, patrons will receive a link and password to view the livestream.

“We are now venturing into our third livestream event since our theater has remained closed due to the pandemic, and we are proud to participate, for the second time, in my good friend Hershey Felder’s inspiring livestream event, honoring the work of George Gershwin, whom you might know as the composer of An American in Paris, Porgy and Bess, and many other great works—not to mention the namesake of one of Broadway’s most famous theaters,” said Ken Novice, president of Dallas Summer Musicals. “While our doors may remain closed physically, they are open virtually to events like these that will help propel our organization forward in this uncertain time.”

George Gershwin Alone tells the story of America’s great composer, who with the groundbreaking Rhapsody In Blue, made a “Lady out of Jazz.” The show incorporates the composer’s best-known songs from “The Man I Love” and “Someone to Watch Over Me,” through the hits of An American In Paris and Porgy and Bess, to a complete performance of Rhapsody In Blue. As the only actor-musician to create the role of George Gershwin on the stage, and with over three-thousand performances, from California to Broadway to London’s West End, for the first time, Hershey Felder will bring George Gershwin to life on the stage of one of Europe’s oldest and most famous theaters, Teatro della Pergola. Hershey Felder as George Gershwin Alone – Live from Florence is produced by Hershey Felder Presents: Live from Florence.

George Gershwin was born in 1898 to Russian-Jewish immigrant parents in Brooklyn. Together, he and his brother Ira wrote standards such as “The Man I Love,” “Someone to Watch Over Me,” “Embraceable You,” “Fascinating Rhythm,” “I Got Rhythm,” “’S Wonderful” and “They Can’t Take That Away from Me.” His groundbreaking opera, Porgy and Bess, is now considered an American classic. All told, George Gershwin wrote more than 1,000 songs for the stage and screen as well as works for the opera house and the symphony orchestra. In 1937, Gershwin died of an undiagnosed brain tumor at the age of 38, never knowing how famous and beloved he and his work would become.

Hershey Felder as George Gershwin Alone – Live from Florence features the music and lyrics of George Gershwin and Ira Gershwin, with a book by Hershey Felder. The production is directed by Stefano deCarli and Felder, adapted from the stage play directed by Joel Zwick. The Associate Director is Trevor Hay. Scenic design is by Hershey Felder. Film production and live editing is by the DeCarli Live film company. Live broadcast and sound design production are by Erik Carstensen. Meghan Maiya is director of broadcasting & special projects.

For more than 75 years, the non-profit Dallas Summer Musicals Inc. (DSM) has presented the very best in Broadway to North Texas audiences. Located in the historic Music Hall at Fair Park, DSM promotes excellence in live musical theater with year-round performances for diverse audiences of all ages, impacting the lives of children and families through education and community outreach programs, while enriching the cultural landscape of North Texas and the Southwest Region.

Named to Time Magazine’s 2016 Top 10 Plays and Musicals, Hershey Felder has played over 6,000 performances of his self-created solo productions at some of the world’s most prestigious theatres and has broken box office records consistently. American Theatre Magazine has said, “Hershey Felder is in a category all his own.” His shows include: George Gershwin Alone (Broadway’s Helen Hayes Theatre, West End’s Duchess Theatre); Monsieur Chopin; Beethoven; Maestro (Leonard Bernstein); Franz Liszt in Musik, Lincoln: An American Story, Hershey Felder as Irving Berlin, Our Great Tchaikovsky, and A Paris Love Story. His compositions and recordings include Aliyah, Concerto for Piano and Orchestra; Fairytale, a musical; Les Anges de Paris, Suite for Violin and Piano; Song Settings; Saltimbanques for Piano and Orchestra; Etudes Thematiques for Piano; and An American Story for Actor and Orchestra. Hershey is the adaptor, director and designer for the internationally performed play-with-music The Pianist of Willesden Lane with Steinway artist Mona Golabek; producer and designer for the musical Louis and Keely: ‘Live’ at the Sahara, directed by Taylor Hackford; and writer and director for Flying Solo, featuring opera legend Nathan Gunn. Upcoming projects include Anna and Sergei, a new play featuring the music of Sergei Rachmaninoff, as well as a new musical based on the award-winning book Out on a Ledge by Eva Libitzky. Hershey has operated a full-service production company since 2001, and in 2020 created a new brand LIVE FROM FLORENCE, that operates a “theatre at home broadcast company,” based in Florence, Italy. He has been a scholar-in-residence at Harvard University’s Department of Music and is married to Kim Campbell, the first female Prime Minister of Canada.