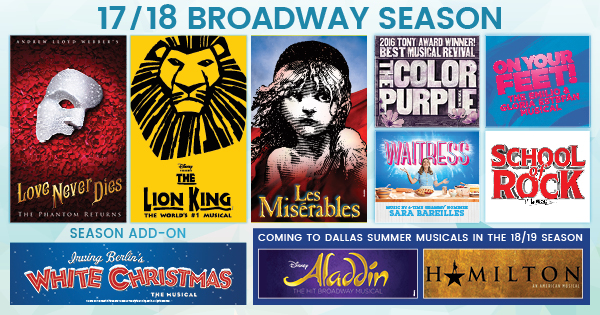 Dallas, TX January 29, 2017 – Dallas Summer Musicals, Inc. (DSM) is thrilled to announce its new 2017-2018 Broadway season! A new era begins with the delivery of seven powerhouse award-winners, as part of a new partnership with Broadway Across America (BAA). DSM will present four North Texas premieres, two timeless revivals and a Disney Blockbuster in its new season bringing the Best of Broadway to North Texas.

Dallas Summer Musicals will kick off its 2017-2018 Broadway season with one of the greatest revivals of all time, THE COLOR PURPLE. The season will continue with the real story of groundbreaking couple Emilio and Gloria Estefan in ON YOUR FEET!; followed by Sara Bareilles’ inspiring and empowering musical, WAITRESS; the captivating and unforgettable, LES MISÉRABLES; the critically acclaimed and visually stunning, DISNEY’S THE LION KING; the enchanting and haunting sequel to Andrew Lloyd Webber’s PHANTOM OF THE OPERA, LOVE NEVER DIES; and closing the season, the upbeat rebellious musical, SCHOOL OF ROCK based on the hit film.

In addition, Dallas Summer Musicals will bring back the joyous holiday favorite, IRVING BERLIN’S WHITE CHRISTMAS as a season add-on.

Winner of 11 Tony Awards and the 2016 Pulitzer Prize for Drama, HAMILTON will be presented by Dallas Summer Musicals in its 2018-2019 Broadway season! From the producer of DISNEY’S THE LION KING, the timeless story of ALADDIN, a thrilling new production filled with unforgettable beauty, magic, comedy and breathtaking spectacle will also be making its North Texas premiere in DSM’s 2018-2019 Broadway season. The best way to guarantee tickets to HAMILTON and ALADDIN is to purchase a season subscription for the 2017-2018 Broadway season. Subscribers who renew for the 2018-2019 Broadway season will be able to guarantee their tickets for the premier Dallas Summer Musicals engagements of HAMILTON and ALADDIN before tickets become available to the general public.

“The lights have never been brighter at DSM, and just like the tradition of a Broadway musical is to always evolve, so has our organization. This season’s lineup is one of our most diverse and anticipated yet. It will be moving, engaging and inspiring filling our patrons with smiles and special moments,” says David Hyslop, DSM Interim Managing Director. ”Join us at the Music Hall at Fair Park and let the magic of Broadway and the DSM Experience transform you.”

“We are delighted to partner with DSM to bring the biggest and best of Broadway to Dallas”
said Lauren Reid, CEO of Broadway Across America.

Dallas Summer Musicals’ seven show season tickets start at $150 and will go on sale January 29 at 9 a.m. online at DallasSummerMusicals.org or at noon by phone at 1-866-276-4884. Beginning January 30 the call center will operate Monday – Friday from 9 a.m. to 6 p.m. CST. Season tickets can also be purchased in person at the box office at 5959 Royal Lane, Suite 542 and at the Music Hall at Fair Park box office Monday-Friday from 10 a.m. to 6 p.m. and Saturday from 10 a.m. to 4 p.m. The Royal Lane box office will permanently move its location to the Music Hall at Fair Park on February 17, 2017. Payment plan options are available. In addition, season ticket buyers have the option to include the season add-on to their season subscription, which is discounted for subscribers.