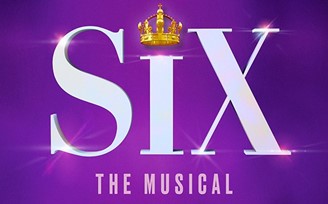 DALLAS, TX (September 15, 2022) – Broadway Dallas and Broadway Across America (BAA) are delighted to announce that tickets for the Tony Award®-Winning electrifying new musical phenomenon SIX by Tony Award®-winners Toby Marlow and Lucy Moss will go on sale Friday, September 16 at 10 a.m. for 24 performances from December 6-25, 2022 at the Winspear Opera House as part of the 2022-2023 Germania Insurance Broadway Series presented by Broadway Dallas.

From Tudor Queens to Pop Icons, the SIX wives of Henry VIII take the microphone to remix five hundred years of historical heartbreak into a Euphoric Celebration of 21st century girl power! This new original musical is the global sensation that everyone is losing their head over!

SIX has won 23 awards in the 2021/2022 Broadway season, including the Tony Award® for Best Original Score (Music and Lyrics) and the Outer Critics Circle Award for Best Musical.

The SIX: LIVE ON OPENING NIGHT Broadway album debuted at Number 1 on the Billboard cast album charts and surpassed 6 Million streams in its first month.

SIX, which closed in March 2020 due to the pandemic on what was supposed to be opening night, is now playing at the Brooks Atkinson Theatre on Broadway in New York City. The show had a successful North American Premiere at Chicago Shakespeare in the summer of 2019. Prior to Broadway, the show played limited engagements at American Repertory Theater (A.R.T.) in Cambridge, MA, the Citadel Theatre in Edmonton, AB Canada, and the Ordway Center for the Performing Arts in Saint Paul, MN.

Cambridge University in early 2017. It was first presented as the Cambridge University Musical Theatre Society’s submission to the Edinburgh Festival Fringe later that year, playing a one-month run and featuring student actors. SIX went on to get picked up by UK Producers and a new production was mounted, with professional actors and a predominantly new creative team, at the Norwich Playhouse and then again at Edinburgh Festival in 2018. A limited engagement at the Arts Theatre in London garnered the WhatsOnStage Award for Best Off-West End Production and the show toured the UK in the autumn of 2018 before returning to the Arts Theatre and subsequently the Lyric Theatre on Shaftesbury Avenue. SIX is currently playing an open-ended run at the Vaudeville Theatre on the Strand. SIX earned five 2019 Laurence Olivier Award nominations, including Best New Musical. A UK and Ireland tour is now running concurrently with the London production. An Australian and New Zealand tour will launch this year at Sydney Opera House with dates set for Melbourne, Adelaide, and Wellington.

TICKET INFORMATION
Individual tickets for SIX will go on sale Friday, September 16 at 10 a.m. and range in price from $40 – $155 (subject to change) with a select number of premium tickets available. Individual tickets will be available online at BroadwayDallas.org and by phone at 800-982-2787. Orders for groups of ten (10) or more may be placed by calling 214-426-4768 or emailing Groups@BroadwayDallas.org.

About Broadway Across America
Broadway Across America (BAA) is part of the John Gore Organization family of companies, which includes Broadway.com, The Broadway Channel, BroadwayBox.com, Group Sales Box Office and Broadway Brands.  Led by 18-time Tony-winning theater producer John Gore (Owner & CEO), BAA is the foremost presenter of first-class touring productions in North America, operating in 48 markets with over 400,000 subscribers. Presentations include Disney’s The Lion King, Wicked, The Book of Mormon and Hamilton. Current and past productions include Ain’t Too Proud, Beautiful, Cats, Chicago, Dear Evan Hansen, Mean Girls, Moulin Rouge! and To Kill A Mockingbird.

About Germania Insurance
Founded in 1896, Germania Insurance provides auto, property, and life insurance for thousands of Texans. It is the largest farm mutual insurance company in Texas and one of the top companies for independent agents. Germania has earned spot on Forbes’ 2021 America’s Best Insurance Companies in Each State list, securing a top-five ranking for both its auto and home insurance products. Germania is a proud Texas company, exclusively providing protection and insurance services for Texans for 125 years.

Winspear Opera House COVID-19 Protocol:
Masks are encouraged but not required at the Winspear Opera House. All show schedules, productions, and protocols for attendance will continue to be reviewed as further guidance and recommendations are provided by the CDC and Texas Department of Health. For the latest health and safety procedures and guidelines, visit https://www.attpac.org/your-visit/faqs/public-health/.