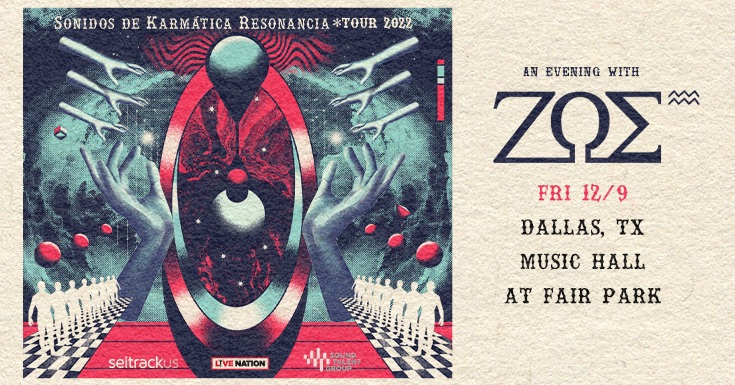 Following more than 10 sold out shows in the US this past fall and an extensive Latin American trek throughout this year, iconic Mexican rock band, Zoé, returns to the US with new dates for its Sonidos de Karmática Resonancia Tour.

The US tour, which will treat fans to a special evening with the band, will make its first stop on November 30 in San Jose, CA and will visit cities like Los Angeles, Dallas, and Chicago before coming to an end on December 16 in New York City.

From the melancholy synth-pop of “SKR” and the melodramatic atmospherics of “Fiebre” to the anthemic chorus of “Velur,” Sonidos de Karmática Resonancia boasts the trademark elements that turned Zoé into million-selling rock stars throughout the Americas: angular melodies, propulsive beats and the kind of addictive hooks that inspire you to dance, or daydream – or both at the same time. This time, however, the wide encompassing mixture of styles – neo-psychedelia, hints of

vintage space-rock, bittersweet touches of new wave delight – blend more cohesively than ever before. Zoé’s knack for generating cinematic moods is anchored on a collection of breathtakingly beautiful melodies.

Not only Zoé’s songwriting evolved, but also its creative methodology. For Sonidos de Karmática Resonancia, the band chose to collaborate with London-based American producer Craig Silvey – known for his work with Arcade Fire, The National and Arctic Monkeys – who had already produced a few tracks on Aztlán.

Masks are recommended, but not required, while in the Music Hall.

QUESTIONS ABOUT YOUR VISIT?